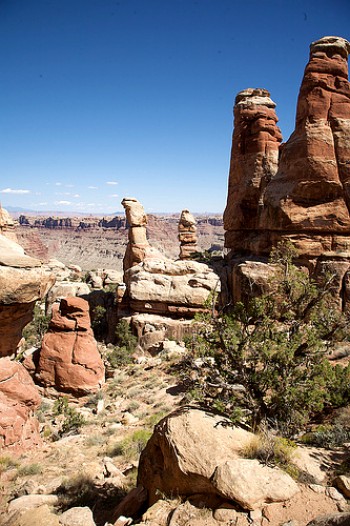 Trail: That portion of the trail in the sandy bottom of the Maze is unmarked, but the route is not difficult to find. The slickrock part of the trail above the Maze is marked with cairns. Some scrambling is necessary to reach the Maze Overlook, and a 20-foot length of rope is useful in raising and lowering backpacks.

The Maze District of Canyonlands National Park, separated from the rest of the park by the Green and Colorado Rivers, is one of the most rugged and remote desert areas in the United States. As described above, just getting there requires seven bone rattling hours of driving across a narrow unimproved road, the last fourteen miles of which cannot be completed without a 4WD vehicle. To their credit, the National Park Service intends to preserve the remoteness, and there are no plans to improve the access road. Indeed, there could hardly be a more appropriate preamble to an experience in the Maze than the long journey across the open desert required to reach it; the rugged canyon country’s isolation definitely adds its appeal.

The Maze, which actually occupies only a small part the Canyonlands Maze District, includes about thirty square miles of land, etched and sliced apart by five major canyons and dozens of smaller side canyons. How could such a small piece of land be carved into so many canyons? From the plateaus above it looks like a labyrinth with the top removed. A convoluted work of art, tenaciously sculpted by ten million years of rainwater searching for a way to the Colorado River.

This loop hike affords fine views of the Maze from the upper plateaus, as well as the experience of walking through one of the canyons below. In addition, the trail also passes by the Harvest Scene pictograph panel, considered to be one of the finest examples of Archaic Indian rock art in the Southwest. Many hikers complete the basic loop in one day, but spending an extra night in the canyons will allow you to include a side trip to the Maze Overlook, the best single place to see the Maze from above. Also, it would be a shame not to spend part of a day exploring a few side canyons before climbing back to the trailhead.

There are four cairned trails leaving from the Chimney Rock parking area. The first trail on the left, bearing around the west side of Chimney Rock, leads to the bottom of Pictograph Fork. When you return to the trailhead at the end of the loop you will be on this trail. The second trail from the left passes by the east side of Chimney Rock and heads north across the plateau above Pictograph Fork. The hike starts on this trail. (The third and forth trails from the left lead to Jasper Ridge and Water Canyon, respectively.)

As you walk northward across the slickrock from Chimney Rock you will see Petes Mesa directly in front of you. The large butte behind Petes Mesa is Ekker Butte. If you loose track of the cairns just stay high on the ridge as you continue towards Petes Mesa. When you get to within a half mile of the mesa, however, be sure to watch more carefully for the cairns so you will not miss the turn when the trail begins its descent down into Maze. Also, be on the lookout for mountain sheep in this area. They are often sighted on the plateau near Petes Mesa.

Once you reach the bottom of the Maze you will be on the sandy floor of a small side canyon leading in a northwesterly direction. Soon you should see three large red rocks that look like a grove of mushrooms growing out of the edge of the rim about a mile down the canyon. This rock formation lies just below the Maze Overlook.

Within fifteen minutes after you spot the mushroom rocks you will pass by another major canyon entering the drainage from the south. This is Pictograph Fork, the canyon containing the famous Harvest Scene pictograph panel. There are several other smaller side canyons in the area, but Pictograph Fork is the largest one. It is nearly 200 yards wide at the junction, with a 150-foot-wide span of slickrock in the center of the stream bed. Also the Chocolate Drops formation is clearly visible from the canyon mouth. This junction is a very pleasant place to stop for the night. There are several good campsites in the area and it is also a good base from which to take a side trip to the Maze Overlook.

If you got off to a late start you may want to wait and see the Maze Overlook in the morning. But if you plan to take photographs it is best to be there in the afternoon when the sun is in the west. Plan on about two hours for the walk from the mouth of Pictograph Fork to the overlook and back.

From the mouth of Pictograph Fork continue walking northwest along the floor of the Maze towards the mushroom formation. After 0.5 mile the drainage dead ends at South Fork Horse Canyon. Turn left here and walk south for another 0.3 mile to a point where a break in the canyon wall provides access to the rim above. The cairned trail up to the rim begins on the end of a long toe of sandstone that protrudes into South Fork from the west rim. Look for the cairns marking the canyon exit point. Also there is a spring in the canyon at the end of the toe, and there is usually a large pool of water in the stream bed at the point where the route starts up.

The trail from the bottom of South Fork to the Maze Overlook is an exciting one, with some scrambling required. If you are carrying a backpack you should have a 20-foot length of rope with you to pull your pack up some of the pitches. If you exercise reasonable care the route is not dangerous, but there is just enough scrambling to make it fun. The trail heads straight up to a ledge just below the White Rim Formation, then turns north and traverses around the stone mushrooms to a break in the White Rim. From there it is an easy climb out to the top.

The view from the overlook point is one of the grandest views in Canyonlands National Park. The loneliness and serenity of this point, with the tortuous jumble of natures handiwork in the canyons below is enough to inspire even the weariest of hikers . How and why could such a vista have been created? The complexity of the panorama astounds.

Given enough time, one must conclude that almost anything is possible. It has taken the forces of nature ten million years to produce this scene. They began by washing away thousands of vertical feet of sedimentary rock that had been deposited during an earlier era to get down to the 250-million-year-old Cedar Mesa Sandstone, from which the Maze was sculpted. The excavation is ongoing, and is still not complete. Here and there one can see remnants of younger rock that still has not been entirely removed: Chimney Rock, the Chocolate Drops, Lizard Rock, the Standing Rocks. Everything else has already been washed down and swept away by the relentless Colorado River. Presently the Maze itself is slowly being etched and chiseled away by the rain and the sun and washed to the sea by the river. The dramatic scene we see now represents only a brief interlude in the long evolution of the Colorado Plateau.

From the mouth of Pictograph Fork it is 0.7 miles up the dry canyon to the Harvest Scene pictograph panel. The panel is located at the bottom of the cliffs, about ten feet above the west side of the stream bed. You will find it about three hundred yards before you come to a thumb-shaped pillar of sandstone in the bottom of the canyon.

No reliable method has yet been developed for dating Indian rock art, but most archeologist believe that the Harvest Scene was painted by the Archaic People who lived in Utah from 8,000 to 2,000 years ago. These are the same people who produced the famous Great Gallery pictographs 18 miles to the north in Horseshoe Canyon (see page 191). The Archaic People, who predated the better known Anasazi, left few other remnants of their ancient culture for us to study; hence archeologist have long struggled to interpret their art. But deciphering the paintings has proven just as difficult as dating them, and we still know little about what they mean. In this panel, one of the figures appears to be holding a sheaf of rice grass; hence the name Harvest Scene.

Continuing up the canyon from the Harvest Scene for another 1.6 miles will bring you to another junction with a major side canyon. The trail splits at this point. If you bear right you will be continuing up Pictograph Fork on a little used trail that finally ends near the east end of Lizard Rock. Most hikers, however, turn left at this junction and follow the cairns up an easier route to the rim that finally ends at the Chimney Rock Trailhead.