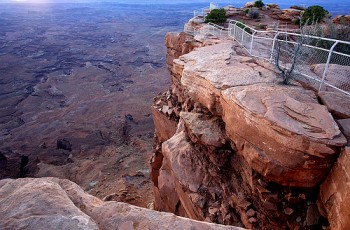 Season: Summer, spring, winter and fall. This hike is very hot in the summer and cold in the winter. The best times are during the spring and fall. For current conditions call the Canyonlands National Park Headquarters in Moab at (801) 259-7164.

Canyonlands, the largest of Utah’s five national parks, is neatly split into thirds by the intersection of the Green and the Colorado Rivers. Both rivers have carved thousand-foot-deep canyons through the high surrounding desert, and the view of their confluence at the center of the park is one of Canyonlands’ most impressive sights.

Both of the famous rivers have now been largely tamed by a series of dams built over the last sixty years, but from this prospective one can still see the same wild scene that John Wesley Powell saw during his historical voyage down the Green and Colorado Rivers in 1869. In July of that year, while his party was camped on the north side of the confluence, Powell and one of his men climbed above the rivers to a point just south of the present day overlook trail. In the following passage, first printed in Scribner’s Monthly in 1875, Powell describes what he saw:

"From the north-west came the Green in a narrow, winding gorge. From the north-east came the Grand [Colorado] through a canyon that seemed, from where we stood, bottomless.... Wherever we looked there was a wilderness of rocks- deep gorges where the rivers are lost below cliffs, and towers, and pinnacles, and ten thousand strangely carved forms in every direction, and beyond them mountains blending with the clouds." (The Canyons of the Colorado, reprinted by Outbooks, Golden, Colorado, 1981)

From the trailhead the trail immediately drops into Big Spring Canyon, and then climbs up the other side. This is really the only strenuous part of the route, but it doesn’t last long. Big Spring Canyon is only 120 feet deep at this point. After leaving Big Spring Canyon the trail meanders pleasantly across the open desert for another 3.1 miles before crossing a jeep road at the northern end of another shallow canyon called Devils Lane. After another 0.7 mile the trail crosses the road again as the road doubles back into Cyclone Canyon. At the point where the trail meets the jeep road the second time you will see another spur road branching off to the west. The trail continues down this road.

After walking west on the spur road for 0.6 miles you will come to a dead end, where there is a small outhouse and a parking area for jeeps. A Park Service sign points the way to the trail that will lead you the last 0.5 mile to the overlook point.

After seeing the rivers from the overlook point, many hikers feel a great urge to descend into the canyon to the shore of the Colorado. There are at least two ways to do this. Three if you include Powell’s route below the overlook point, but I would hardly recommend his route. It is quite exposed and requires some rock climbing skills. (Amazingly, Powell did it with only one arm! He had lost his right arm 7 years earlier in the Civil War.)

If you want to hike to the Colorado via the Lower Red Lake Canyon Trail you had better pack for at least two days. However, if you have a four-wheel-drive vehicle you can easily visit the Colorado River and the confluence overlook in one day. A well-used jeep road from Elephant Hill to Cyclone Canyon will give you access to both the Lower Red Lake Canyon Trail and the Overlook Trail, allowing you to see everything with only about nine miles of hiking. (See page 204 for an explanation of how to get to Elephant Hill.)

The other way to reach the Colorado River involves a side trip of 2.0 miles each way from the confluence overlook trail. If you elect to follow this route, walk back to Cyclone Canyon and turn north at the point where the trail leaves the jeep road. Follow the Cyclone Canyon jeep road north for 0.5 mile. The road starts out heading almost due north, and then swings around to the east. Just after the turn to the east you will see the beginning of a drainage that heads off in a northwesterly direction towards the river. You can follow this drainage all the way to the Colorado River. The route involves about 1.5 miles of off-trail hiking, but many hikers have gone before you and the way is clearly marked by cairns. The route becomes very steep as you approach the river and some scrambling is necessary, but the danger is minimal if you are careful to follow the cairns. Once you reach the Colorado it is another 0.9 mile walk downstream to the confluence itself.