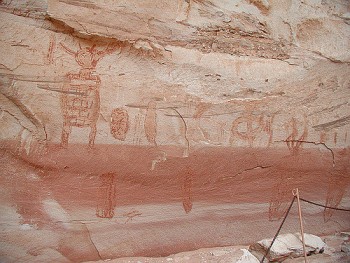 The rugged canyons of what is now Canyonlands National Park have witnessed many human events since the earliest Americans. Paleoindians first entered the region around 10,000 years ago. Since then, the tides of human occupation have ebbed and flowed in concert with the availability of various resources and the technology to take advantage of those resources.

People have visited what is now Canyonlands National Park for over 10,000 years. Over time, various groups moved in and out of the area in concert with the availability of natural resources and the technology for exploiting those resources.

The first humans known to visit Canyonlands were Paleoindians, who searched for large game animals and edible plants as long as 10,000 years ago. While some of their projectiles have been found in the park, it was not until about 5,000 years ago that people routinely lived in the area. During the time period from about 5000 to A.D. 250, people continued to gather wild plants and animals, utilizing stone tools and throwing devices like the atlatl. The importance of grasses is recorded on many archaic rock art panels, especially those representative of the "Barrier Canyon" style that can be seen in Horseshoe Canyon.

By A.D. 250, farming techniques from Mesoamerica had reached the southwest, and the hunter-gatherers were cultivating corn and constructing slab-lined cists for storing the collected grains. Intially, the agriculturalists did not have much use for the hot, dry climate of Canyonlands. However, growing populations in nearby Mesa Verde and new techniques of flood-water farming caused people to take advantage of bottomlands and alluvial banks in many canyons of the southwest. By A.D. 1200, there was a major occupation in Salt Creek Canyon in the Needles District. You can see the storage structures or granaries used by the ancestral puebloans in the Needles District at Roadside Ruin, and at the Island in the Sky on Aztec Butte. Around A.D. 1300, the Ancestral Puebloans left the region and moved south to Arizona and New Mexico, probably due to climatic changes.

Utes moved into the area as early as A.D. 1300, living without permanent dwellings much like the hunter-gatherers in the Archaic period. Ute, Navajo and Paiute Indians all occupied southern Utah when Spanish explorers entered the area in the late 1700's, though their use of the Canyonlands area appears to have been minimal.

In the 1770's, the Escalante and Dominguez parties circled Canyonlands, looking for a route between Santa Fe, New Mexico and Monterey, California. Though southern Utah was recognized as a Spanish possession with the signing of the Adams Onis treaty in 1819, this did not deter French and American trappers from entering the area in the early 1800's. From 1836 through 1838, a trapper named Denis Julien carved his name throughout the Canyonlands area, including in the Colorado River canyon. The U.S. Army sent Captain John N. Macomb on an expedition to explore the Colorado Plateau for a wagon route from New Mexico to Utah in 1859. The expedition members drew the first accurate maps of southeast Utah, and compiled geographical and geological information of the area. river

Europeans knew little of the Colorado River and its tributaries until 1869, when Major John Wesley Powell completed his first expedition from Green River, Utah through the Grand Canyon. Powell repeated the expedition in 1871-72, continuing his studies of the geological, natural and cultural history of the area. Bert Loper, Charles S. Russell, and E.R. Monett made the first pleasure run down the Colorado River through Cataract Canyon in 1907. Julius Stone was the first to hire a guide, Nathaniel Galloway, to take him down the river in 1909. The first motion pictures of the canyons were filmed by Emery and Ellsworth Kolb on their 1911 trip, and in 1937 Norman Nevills started commercial river trips down the Colorado.

In March 1883, the Denver & Rio Grande railroad joined with the Rio Grande Western railroad near Green River, Utah, providing rail transportation to southeastern Utah. This, combined with the removal of Native Americans to reservations during the late 1800's and early 1900's, nurtured the growth of farming and ranching communities such as Moab and Bluff. With the Utes removed to the Uinta Reservation, Mormon settlers reclaimed the abandoned pioneer community of Moab, and Mormons from the town of Bluff settled Blanding, Monticello, and La Sal.

The first Europeans to permanently settle southeast Utah were ranchers. From the 1880's until 1975, much of Canyonlands was used for ranching, and features in each district of the park bear the names of these early cowboys. Deb Taylor, Al Holman, John Shafer and many others grazed both cattle and sheep around what is now the Island in the Sky.

The Biddlecomes, Ekkers, Tidwells and Chaffins are names common to the Maze, and A.C. Ekker continues to ranch inside the Orange Cliffs Unit of Glen Canyon National Recreation Area today. In addition to cattle, the rugged country around Canyonlands harbored cattle rustlers and other outlaws. Robbers Roost, a mesa top west of the Maze, served as a secluded refuge for Robert Leroy Parker (Butch Cassidy), Tom and Bill McCarthy, Matt Warner and others.

Due to the rugged topography of the Canyonlands area, much of it was accessible only by foot or horse until the Uranium boom of the 1950's. With the growth of the country's nuclear arms program, the Atomic Energy Commission offered monetary incentives for the discovery and delivery of Uranium ore. Certain rock layers in Canyonlands contain Uranium, and prospectors built many exploratory roads on public lands in search of radioactive "gold". Many of these routes, including the White Rim Road at the Island in the Sky, are popular four-wheel-drive roads today; others exist as scars that are slowly revegetating.

The Creation of Canyonlands

In the 1950's and early 60's, Arches National Monument Superintendent Bates Wilson began advocating for the creation of a "Grand View National Park" in what is now Canyonlands. Wilson first visited the area by horse in 1951, and spent four years working on a National Park Service archaeological investigation of the Needles District. The Secretary of the Interior, Stewart Udall, visited the area in 1961, and began lobbying Capitol Hill for a national park on what were then Bureau of Land Management lands.

"...in order to preserve an area in the State of Utah possessing superlative scenic, scientific, and archaeological features for the inspiration, benefit and use of the public...". Initially consisting of 257,640 acres, the park was expanded in 1971 to its present 337,570 acres.