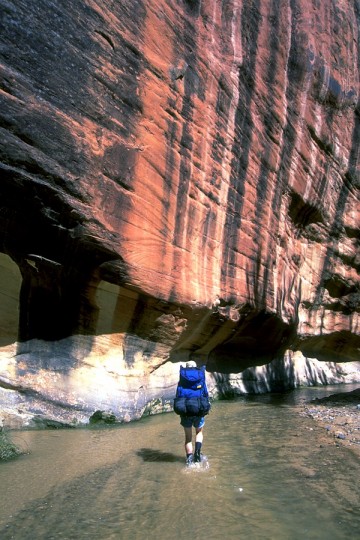 Trail: Most of this hike is through the sandy bottom of a desert canyon. There is no maintained trail, but the route is easy to follow. At the end of the hike it is necessary to ford the Fremont River. This is usually not a problem, but if there has been a lot of rain you should check the river before beginning the hike.

Season: Spring, summer, fall, winter. There is snow on some parts of the trail during the winter months. The trail is very hot in the summer, with temperatures often exceeding 100 degrees F. There is no reliable water along the trail, so be sure to carry plenty. For current conditions call the Visitor Center, Capital Reef National Park, at (801) 425-3791.

Chimney Rock Canyon is a long, narrow desert drainage on the northwestern side of Capital Reef National Park. It begins just outside the park on the eastern slopes of Thousand Lakes Mountain and meanders for some 15 miles through the Waterpocket Fold before draining into the Fremont River. This hike intersects the canyon at its midpoint and follows it for its last six miles.

The hike is particularly interesting from a geological point of view because it passes through so many different geologic strata. The route begins in the Moenkopi Formation, then passes through the Shinarump, Chinle, Wingate, and Kayenta Formations, and finally ends in the center of the Waterpocket Fold at the base of the Navajo Sandstone. The sequence is unusual because the Navajo Sandstone was deposited about forty million years after the Moenkopi Formation, yet here it lies a thousand feet lower.

As you descend through the canyon you will see successive layers of younger rock slanting downward along the walls to meet the older layers at the bottom. The Waterpocket Fold is a giant wrinkle in the earths crust that was formed in southern Utah about 65 million years ago. Because of the uplifting and subsequent erosion along the Fold, the exposed rock is now older on the west side than the east. The streambed of Chimney Rock Canyon cuts into the Waterpocket Fold from its western side and ends near its midpoint.


Chimney Rock Canyon was named after Chimney Rock, an impressive pinnacle of Moenkopi Shale that rises from the desert floor near the trailhead. The trail begins by winding gently upward from the parking area on the west side of Chimney Rock and then around to its north side. After walking 0.5 mile and climbing 250 feet you will come to a junction where another trail takes off to the right. This alternative route veers south again to pass by the base of Chimney Rock and then rejoins the main trail 1.7 miles later. If you have the time you might want take this detour for a closer look at the monolith, but doing so will add about a mile to the total length of the hike. If you take the shorter route, to the left, you will reach the point where the two trails come together again after about 20 minutes.

After the second junction the trail descends gradually down a short, unnamed canyon for about 1.6 miles before finally intersecting Chimney Rock Canyon. To reach the Fremont River you must turn right when you reach the main canyon, but if time permits, or if you are doing this hike as an overnighter, you may want to make a side trip to the canyon’s best known spring. The spring lies about 1.0 mile upcanyon to the left. It is situated in an alcove just above a small pool of water under the north wall of the canyon. You will know you are near when you see a grove of large cottonwood trees. (Cottonwood trees in the desert country of southern Utah usually mark the presence of water.) Chimney Rock Canyon is often called Spring Canyon, because of this spring.

From the point where the trail first meets Chimney Rock Canyon it is 6.9 miles to the Fremont River. There is no real trail, but the route is generally easy to walk. You will be following the sandy creek bed nearly all the way. There are some deer tracks in the canyon bottom, but the most interesting aspect of the hike is the geology. Much of the rock is a deep red color, and in the section of the canyon that passes through the Wingate Formation, the sandstone walls are sheer and smooth. You may be surprised to find frequent boulders of black volcanic rock. These worn boulders were washed downstream by flash floods from a volcanic area near the source of the canyon. Now they lie in stark contrast to the reddish sandstone and shale of the Waterpocket Fold.

About half way through the gorge you will enter a half-mile section of narrows, where the canyon walls converge to a mere five feet apart. There are also two ten-foot pouroffs, or dry falls, in the bottom of this stretch of canyon. These falls are relatively easy to climb down and should not be a problem unless you are carrying a large backpack. But if they do present a problem, there is an alternative route around them. When you come to the first pouroff retrace your footsteps a few hundred feet back to a point where you can climb up to the ledge on the north side of the narrows. There you will find a primitive path that bypasses the obstacles before dropping back to the canyon bottom.

Finally, just before you reach the end of the hike, the canyon widens and becomes less arid. The walls change from the ruddy, fissured Wingate and Kayenta Sandstone to the smooth, white crossbedded texture of the Navajo Sandstone. Soon you will round the last bend in the canyon and be confronted with your last obstacle-the Fremont River.

Under normal circumstances, fording the Fremont is no problem. It is seldom more than 18 inches deep. If there has been a lot of rain, however, its depth can easily rise to twice that. Find a stout stick to help you with the crossing. Walk slowly, taking small steps, and make sure the stick and one foot are firmly planted before moving your other foot. The stick should be positioned on your downstream side, with your right side facing upstream as you walk.