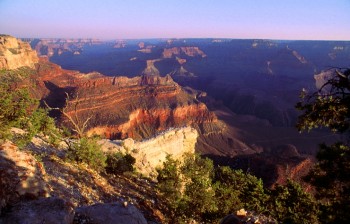 Kane County is the gateway to the North Rim of the Grand Canyon, one of the seven natural wonders of the world. Travel 90 minutes south of Kanab through the Kaibab National Forest to one of the worlds most spectacular views. A rugged, restless collection of colors and canyons, buttes and mesas, wildlife and vegetation, the Grand Canyon is awe-inspiring. There are trails to hike and burro rides to the bottom. Or arrange a flight over Grand Canyon from Kanab.

Lake Powell is one of the most beautiful lakes in the world, with more shoreline than the United States Pacific Coast. Famous for its trout and bass fishing and mirrorlike waterskiing. Lake Powell can also be a sightseeing adventure. Explore seemingly endless canyons by boat and discover such natural wonders as Hole-in-the-rock and Rainbow Bridge (the largest natural span in the world). Lake Powell is only 65 minutes east of Kanab with a beach at Lone Rock and marinas at Bullfrog Basin, Dangling Rope, Halls Crossing, Hite and Wahweap. Along the way, visit Old Paria and Glen Canyon Dam. then back to Kanab for a good night's rest.

High in the pine and cedar forests to the west of Bryce Canyon is the deep, wind-eroded barrier known today as Cedar Breaks. This brilliantly colored half-bowl canyon, only accessible in the summer and fall, rewards visitors with a breathtaking vista on rugged badlands. The scenic drive to the monument is in itself, worth your time.

Unusual rock formations and abundant wildlife make this spot an inviting side trip on a visit to Bryce Canyon. Take along plenty of color film to capture this scenic landscape.

The Paiutes aptly named this place unke-timpe-wa-wince, pock-ich, which means "red rocks standing like men in a bowl-shaped canyon." Bryce Canyon is a formation similar to Cedar Breaks, but situated 2,000 feet lower. It is made up of 14 enormous amphitheaters carved into the pink and white limestone of the Paunsaugunt Plateau. The canyon’s endless clusters of hoodoos, spires, and other eroded rocks feature countless shades of red, pink and orange, and almost every shape imaginable.

Utah is know for having "The Greatest Snow on Earth" and it's not all up north! Brian Head Ski Resort, north of Kanab, offers skiers both beginning and advanced slopes, plus short lift lines. Snowmobiling and cross country skiing in Kane County's high country offers a refreshing perspective of this breathtaking contry. 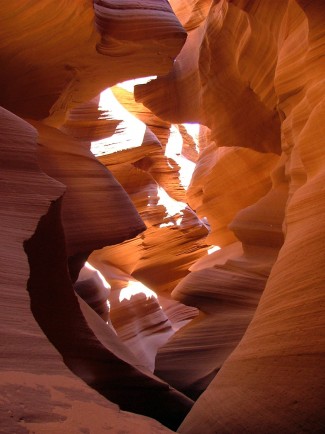 Only 45 minutes west of Kanab is Zion National Park (an awesome spectacle of towering cliffs and incredible gorges). The Paiutes called it makuntuweap, meaning "straight canyon." Zion National Park is one of the most popular visitor attractions in the state, with some 2.5 million people coming to Zion each year. Driving and bicycling along the paved roads are popular ways to see the park, but the best way to become really familiar with it is to hike in the narrow side canyons or up to one of Zion’s famous rock "temples" on any of the many trails. Be sure to visit the Zion Canyon Cinamax Theater just outside the south entrance to the park in Springdale for an incredible look at Zion’s majesty and it’s unique history on a screen six stories high. The Film shows daily beginning half past the hour.

Kanab first became a movie set in 1922 with the filming of "Deadwood Coach". Since then over 100 films and commercials have been shot on location in and around Kanab, earning Kane County the nickname of "Little Hollywood." Movie sets still stand in Johnson Canyon, as well as Old Paria-which is open to the public.

Kane County and horseback riding just naturally go together. You'll find hundreds of miles of trails through the fameous blue cedars near Kanab and other alpine trails in surrounding high country.

Kane County is rich in Indian petroglyphs, in fact the National Parks were once the home of ancient Indians who left many of their records on the rocks. Indian wall paintings are either pictograph, usually a simbol painted on a stone, or petroglyph, a picture carved into the stone. These writings are usually found in protected canyons or under cliff overhangs.

An Oasis in the middle of the desert, Pipe Spring is the site of a pioneer fort built by Brigham Young and Jacob Hamblin to protect migrating settlers from Indians. Only 20 miles southwest of Kanab, Pipe Spring is an experience in pioneer heritage. 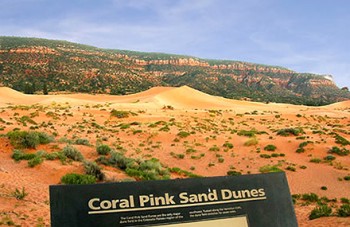 Coral Pink Sand as far as the eye can see, changing formation with every breath of wind is one way to describe the dunes just south of Mt. Carmel Junction. Some of the trails are handicap accessible. Perfect for dune-buggying, horseback riders, popular with photographers, and fun for the whole family!

This state park is also a great place to camp. It has regular campsites for tents and RV spots. Amenities include modern restrooms, showers, and sewage disposal. Numerous picnic areas -- including some with pavilions for groups -- also enable day visitors to enjoy the park and recreational activities in it.

The Visitor Center here also provides information about the area. Rangers manning the center will answer questions about the area's history, flora, fauna, and recommended activities.

Whether stopping at the roadside or backpacking into remote areas, You'll find plenty of ideal picnicking, camping and trails for hiking & bicycling spots in Kane Country.

Several lakes, streams and reservoirs within a few hours drive of Kanab provide great sport fishing. Fish for rainbow trout at Navajo Lake or Panguitch Lake, both with boat rentals. Other fine fishing can be found at Duck Creek, Yankee Meadow Reservoir, Tropic Reservoirs and Boulder Mountain Lakes, as well as the streams that feed them.

Kanab, Utah. Built in 1884, the Heritage House was a restoration project organized in 1974 by local citizens and Kanab City. Year round tours of the home are available through volunteers to the Heritage Society.