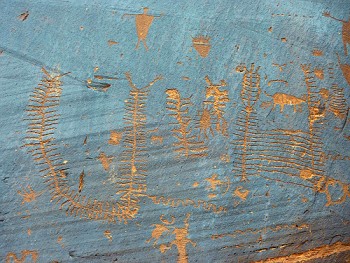 Moab sits in a valley fifteen miles long and three miles wide near the east bank of the Colorado River and just west of the 12,500-foot-high La Sal Mountains. In the 1830’s the valley was significant because of the nearby Colorado River crossing used by white settlers and Native Americans alike. In 1855 Brigham Young, leader of the LDS church, sent 41 men to the valley to perform missionary work and to try and control the river crossing. Together, the men constructed a rock fort and established the Elk Mountain Mission at present day Moab. Relations grew tense between the settlers and the Native Americans and in September of the same year a battle occurred that left two of the Mormon settlers dead. In defeat the settlers abandoned the fort and returned to their homes in Sanpete Valley.

A little over two decades later, in 1878, permanent settlers returned to Moab to establish farms and ranches. The community continued to grow steadily and in 1882 a Mormon ward and a community school were established. In 1883 the railroad running between Salt Lake City and Denver was completed bringing the railroad within 35 miles of the isolated community. A ferry across the Colorado River began operating in 1885 and the first bridge across the Colorado was completed in 1912. In 1890 Grand County was created by the Utah Legislature and on December 20, 1902, Moab was incorporated as a town. By the beginning of the 1900s Moab had become one of Utah's finest fruit-growing areas, producing peaches, apples, and grapes.

Moab received its name from the Mormon settlers because of its geography and geographical location. In the Bible the name Moab appears frequently pointing to a dry, mountainous area east of the Dead Sea and southeast of Jerusalem. Moab, Utah was a dry mountainous area that fit the same geographical relationship to Salt Lake City and the Great Salt Lake.

The Uranium boom of the early 1950s transformed Moab’s economy from farming and ranching community into a mining town; bringing in many prospectors, miners, and workers. The mining boom brought new business to Moab and tripled the population. By 1920, the southeastern Utah area had produced more than 2.4 million dollars in uranium. Potash and manganese also played a role in Moab’s mining industry, along with oil and natural gas.

By 1964 the demand for Uranium had decreased and hundreds of workers had been laid off. The community began to look towards tourism as a chance to save its waning economy. The river-running craze, which had begun slowly in the 1950s, gained momentum and became a staple of the region's tourist industry by the early 1970s. In 1975 there were 313,000 visitors to Arches National Park. The establishment of Canyonlands National Park in 1964, for which Moab serves as the northern gateway, also assisted in Moab's becoming an important tourist and recreation destination. During the 1980s Moab, with its hundreds of miles of slickrock trails, gained worldwide fame as a mountain-biking center. 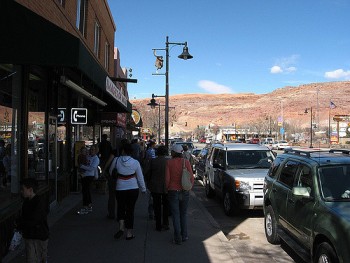 Today, mining industries such as oil exploration continue to boost the local economy, but Moab is primarily a tourist based economy. It is estimated that over a million people visit Moab each year.