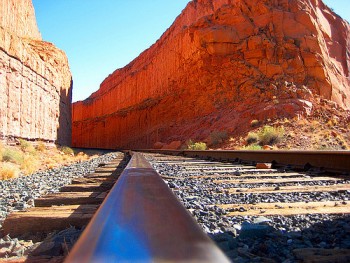 Because Moab is in a desert it is subject to extreme variances in temperature. Temperatures have been reported as high as 113 degrees Fahrenheit and as low as -20 degrees F. In spite of the intense heat that visits Moab each summer, the climate is generally moderate making Moab a popular year-round playground with spring and fall being the most pleasant times of the year to visit.

Rainfall in Moab averages about eight inches per year with October being the wettest month and March taking a close second. During the summer Moab is prone to sudden, brief, violent thunderstorms that can result in flash floods.

Plant life in Moab is typical of that found in high desert life zones and includes sagebrush, saltbush, serviceberry, and mountain mahogany. Juniper and pinion are found along with desert shrubs until about 7,500 feet elevation where the mountain ecosystem of aspen, spruce, and fir takes over.

If you plan on driving Moab can be accessed from U.S. I-70, U.S. Highway 191, and the Utah Scenic Byway 128. Visit our maps page for more detailed information. Moab is also accessible by railroad and it is just a short drive from the Green River depot. Moab receives flight services through Salmon Airlines as well as three other charter companies and there is a car rental service at the airport. You can also arrange for van shuttle services from Salt Lake City, Utah or Grand Junction, Colorado. Click on our transportation page to find out more.

Moab has several public parks. These parks can be reserved for special gatherings and events. Contact the Moab Public Works Department at 435-259-7485 for information on reserving a park.

Moab is beautifully situated in the red rock country of Southeastern Utah along the Colorado River and is the gateway to both Arches National Park, which is only six miles from downtown, and Canyonlands National Park located 32 miles south of Moab. The City is surrounded by public lands which are used not only for grazing, drilling, and forestry but for recreation such as mountain biking, hiking, river rafting, rock climbing, and cross-country skiing.

The city of Moab offers over 30 motels, numerous camping areas, many bed and breakfast establishments, as well as apartment type lodging. There are over 50 restaurants, as well as an abundance of camping supplies stores, sport outfitters, tour guides, and gift shopping available. Moab has a spectacular 18-hole golf course as well as tennis courts, bowling, a movie theater, a water park, amusement center, and scenic chairlift.

Moab’s beautiful red rock landscape has attracted artists of all kinds. After a day of exploring you can come into town to enjoy theater productions, a variety of galleries, concerts, and arts and music festivals. Throughout the year Moab is host to many events such as vintage car shows, rodeos and horse events, volleyball and fast pitch softball tournaments, marathons, parades, archery and shooting meets, mountain bike races, the Annual Flat Tire Mountain Bike Festival, and the Annual East Jeep Safari.

Though the town was originally established by members of the LDS Church, Moab has become a very religiously diverse community. The following is a listing of the different church groups found in Moab:

While the city of Moab has a small population, the number of visitors to the area’s recreational and tourist destinations total over 2 million annually. The tourism industry and the adventure sports also bring patients to Moab’s emergency room. If you or someone in your group is injured, you don’t need to worry because they are very well prepared. Allen Memorial Hospital (AMH), located in downtown Moab, is a 38-bed facility, which includes long term and skilled care, critical and emergency care, acute care, labor and delivery services, and a care-center wing. Nine board-certified physicians are currently on staff, including a general surgeon, an anesthesiologist, an internist, an emergency specialist, and family practitioners.

If you need to check your email or surf the Internet during your visit you can access the internet at the following locations: