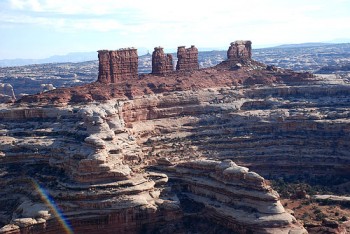 Trail: This is a slickrock trail, well marked by stone cairns.

"What shall we name those four unnamed formations standing erect above this end of The Maze? From our vantage point they are the most striking landmarks.... In a far-fetched way they resemble tombstones, or altars, or chimney stacks, or stone tablets set on end."(Edward Abbey, Desert Solitair, a Season in the Wilderness, Simon & Schuster, New York, 1968)

When Edward Abbey first wrote these words he was standing on the Maze Overlook (page 217) looking at what we now call the Chocolate Drops. The Maze has since been protected as a part of Canyonlands National Park, and consequently it is still possible to share the feeling of wonderment that Abbey must have experienced forty years ago.

The Chocolate Drops formation consists of four vertical rectangular shaped columns of Organ Shale that rise almost 200 feet above the ridge separating South Fork Horse Canyon from Pictograph Fork Canyon. They are one of the most prominent landmarks in the Maze and can be seen from miles around. The trail described here also passes by a half dozen other pillars of Organ Shale on its way to the Chocolate Drops. These formations are all part of an area known as the Land of Standing Rocks.

Follow the cairns from the parking area around the east side of the large monolith beside the road, then on towards the other spires farther out on the plateau. All of these formations are the unlikely remains of a 200-foot-thick layer of Organ Shale that once covered Canyonlands. By now, however, the unrelenting forces of erosion have almost completely removed the crumbling rock from the area, and only a few pinnacles of red shale still remain. After about thirty minutes the trail passes by the next group of Organ Shale formations, including one particularly picturesque mound that is topped by an enormous balanced rock. So precarious is the capstone that it is hard to pass beneath it without unconsciously walking a little faster.

From the balanced rock to the first Chocolate Drop is about three miles. The route is well marked with cairns and not difficult to follow. It is generally an easy walk across level ground, however at one point some minor scrambling is necessary to get to the bottom of a low spot on the ridge. If you look to the right when you reach this point you will find an easy way down the slickrock to the bottom of the incline (about 50 feet lower), and beyond this point there are no additional obstacles.

As you walk northward along the ridge you can frequently peer into the bottom of Pictograph Fork on your right. At one point you can look directly down at the Harvest Scene pictograph panel (page 218). From the trail the panel is almost three-fourths of a mile away, however-too far to recognize any of the pictographs. When you finally reach the last Chocolate Drop on the end of the plateau you will also have a clear view of the trail down from the Maze Overlook.