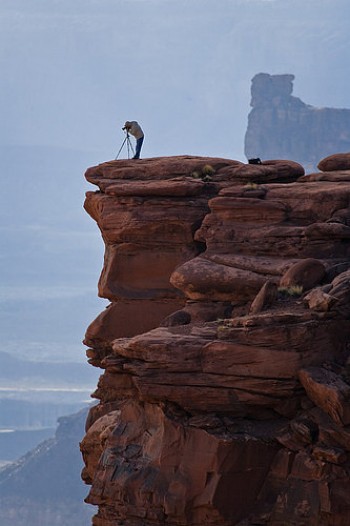 For colorful desert scenery it is hard to beat this popular hike. The normally light colored Cedar Mesa Sandstone has a rich red layer running through it in this area, which makes it much more colorful than the same formation in the nearby Maze. Beginning with the impressive Doll House, at the beginning of the trail, the rock formations along this hike are truly magnificent. They are particularly pretty in the late afternoon when the sunlight tends to enhance the red bands in the sandstone.

From the trailhead the trail winds northward, through clusters of sandstone formations similar to those found on the other side of the Colorado in the Needles District of the national park. Within 0.8 mile you will see the small Beehive Arch on your left. The trail winds down the slope a little ways and then back, passing right beside it.

About a mile beyond the arch start watching for pieces of flint scattered on the ground, particularly at the base of the sandstone cliffs on the left side of the trail. This glassy stone was brought here by prehistoric Indians from other locations in the park. Look carefully at the smaller pieces and you will see that most of them are actually flakes that have been chipped from larger stones. These flakes are especially prevalent in a few alcoves along the trail where prehistoric Indians must have worked, chipping the hard rock into points, scrapers, and other tools.

Halfway to the overlook point the trail skirts past the head of a large canyon. Although you can’t see it from this perspective the Colorado River is below you, over a thousand feet down at the northern end of Cataract Canyon in an area called Spanish Bottom.

A mile beyond the canyon the trail enters a large open meadow, similar to Chesler Park in the Needles District. In the center of this meadow you will encounter another trail coming in from the northwest. This trail leads to Water and Shot Canyons, and ultimately back to the Chimney Rock Trailhead.

Continue east and soon the overlook trail splits into a 0.9 mile loop the goes past the overlook points. If you bear right here for another 0.4 mile you will arrive at the western rim of the Colorado River Gorge. The river is only about 400 yards away at this point, at the bottom of a nearly vertical wall. From there the path bends around to the west again, passing by a fine view of the Green River. You might want to do a little off-trail hiking before you leave this loop in order to achieve better views of the rivers. Soon after the trail leaves the Green River viewpoint it drops back into the meadow to complete the loop. From that point back to the trailhead is 4.0 miles.