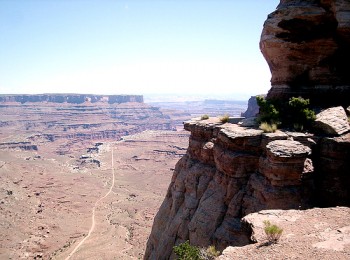 Trail: Good trail most of the way, but very steep and rocky for a half mile at the beginning and end.

Season:Spring, summer, fall, winter. Canyonlands is very hot in the summertime and receives some snow in the winter. The best seasons for this hike are spring and fall. For current conditions call the Canyonlands National Park Headquarters in Moab at (801) 259-7164.

Vicinity:Canyonlands National Park, Island in the Sky District, near Moab

Hiking the Murphy Trail is an excellent way to gain an appreciation for the wild beauty and expanse of Canyonlands National Park. It is also a good way to sample some of the history of Canyonlands. The trail was built during World War One by the Murphy brothers, who grazed cattle in the area from 1917 until about 1920. The area on and below the Island in the Sky Mesa was used extensively for winter grazing by local cattle ranchers during the first half of this century, and many remnants of their occupation can still be seen.

The Island in the Sky district was also an active exploration area for uranium prospectors during the 1950s. Uranium ore is often found in the Chinle geologic formation above the White Rim Plateau, and during the nuclear energy craze of the 1950s prospectors came from all over the country to try their luck in Canyonlands. There are no active mines in the area now, but if you stand just about anywhere on the rim of Island in the Sky and gaze down into the canyon you can see parts of the old roads and trails built by the miners.

When the area became a national park in 1964 prospecting was no longer allowed, but 4-wheeling and bicycling on some of the old roads has become very popular. In particular, the 100-mile-long 4-wheel drive White Rim Road, which circles the Island in the Sky has become one of the parks best known attractions. The middle 1.4 miles of this hike, connecting Murphy Hogback to Murphy Wash, is along the White Rim Road.

From the parking area on Murphy Point the trail proceeds for 0.6 mile to the edge of the rim before plunging downward through a fault in the Wingate Sandstone. When you first look over the edge you may wonder how on earth anyone could get down there. But, miraculously, there is a way. The trail switchbacks down a series of ledges near the top, then finds a debris-scattered slope for the rest of the route. Near the bottom there is one exciting part where the Murphy brothers built a wooden bridge across a ten-foot gap in the trail. The logs in the bridge are close to a hundred years old now, but they still seem sturdy enough.

When the trail reaches the bottom of the cliff it splits, with the left fork heading down Murphy Wash and the right fork going out onto Murphy Hogback. If it is still early in the day I suggest you turn right here and take the Murphy Hogback Trail, but if it is near noon you should go down Murphy Wash first. The reason for this is that the most beautiful part of the hike is along the Hogback, and you should save this portion for when the sun is lower in the sky. If the sun is directly overhead the geology of the shadowless canyons is not as interesting. From a practical point of view it doesn’t really matter which fork you take. The trails are joined at the other end by the White Rim Road, and the loop can be walked in either direction. I will assume here, however, that you choose to proceed via the Hogback trail.

The views from Murphy Hogback are so impressive that, upon reaching the White Rim Road, many hikers choose to return the same way. The Soda Springs Basin lies below you on the northwest side, with the photogenic towers of the Organ Rock Formation reaching up along the shores of the Green River. The river makes a huge meander into the basin, circling around another famous formation known as the Turks Head. And farther to the south, across the hidden recesses of the Colorado River, are the pinnacles of the Canyonlands Needles District. It is an immense 360 degree panorama. Many of the same features can more easily be seen from the viewpoints above the rim, but it is not quite the same up there. Down on the Hogback you get the feeling that you are more than just an observer. You are somehow a part of it all.

Once you reach the White Rim Road turn left and walk southeast along the road for 1.4 miles until you see a sign marking the beginning of the Murphy Wash Trail. Murphy Wash is interesting in a less dramatic way. The sandy wash is more protected and receives more water that the exposed Hogback; hence the plant life is quite different there. Soon after leaving the road you will pass by a small spring which, as the animal tracks attest, attracts a good deal of canyon wildlife. As you near the top of the wash you will pass by an old corral, one of many left by the ranchers who worked the area. Finally, 2.6 miles after leaving White Rim Road, the trail climbs out of Murphy Wash and rejoins the original trail for the climb back to the rim.