Although this "tour" is free, there is a $4 entrance fee when you come to the park to drive the Scenic Drive.

Most rock at Capitol Reef is sedimentary, meaning it was formed in layers from loose materials - sediments - like mud and sand.

Geologists have classified the rock layers into various formations. Many formations also have different parts, or members.

These layers entomb the landscapes and lifeforms of a younger planet Earth.

In the hill to the left, thin beds of reddish-brown rock known as shale were formed from silt and clay that came to rest in the quiet waters of lagoons, mud flats, and coastal flood plains. This 225 million year old rock is the Moenkopi Formation. Geologist believe that the Moenkopi, more than 950 feet thick in places, was laid down in a moist, tropical climate.

The gray band of rock just above the Moenkopi is a greenish-gray shale that was once volcanic ash. Its one part of the Chinle, a complex, 700-foot thick formation that is rich in petrified wood. The Chinle ascends to the base of the reddish wall.

From here you can see the rugged western face of Capitol Reef.

The tale of how these cliffs, canyons, and domes formed is complex, but the view from here tells the essentials of the story.

First, see how rock bands of differing thickness, colors, and textures lie one upon another like layers of a cake? The rocks of Capitol Reef were once sediments - silt, sand, clay, volcanic ash, and gravel - laid down in many different environments during the Age of Dinosaurs, and long before. The younger rocks lie on top of the older rocks.

Second, notice the tilting of the rock layers. When the Colorado Plateau was born, enormous pressures deep within the earth buckled the already ancient rock beds here into a 100-mile-long - but relatively narrow - "fold.". Geologists called this the Waterpocket Fold because of numerous small potholes or "pockets" found in the area that can hold rainwater. Third, study the maze of shapes carved out of the tilted rock layers. The Waterpocket Fold has been under heavy attack by erosion since its creation. Capitol Reef is one of its remnants.

"Erosion" means not only the crumbling of rock by frost, plant roots, and internal water seepage, but also the blowing or washing away of the particles.

Remember these three elements of the geologic story - sedimentary rock, folding, erosion - and few landforms at Capitol Reef will remain a mystery to your for long.

The twisting Grand Wash spur road takes you into a world dramatically different from the dark red hills along the base of Capitol Reef. Avoid this road when a storm is threatening. Grand Wash is a narrow, steep-walled canyon subject to dangerous flash floods that often arrive with little warning.

Beyond a one-mile drive, foot trails lead into the narrowest, most spectacular part of the canyon and up to a graceful curve of stone arch on the canyon's north wall - Cassidy Arch. The arch was named for turn-of-the-century outlaw Butch Cassidy, who is thought to have hidden occasionally in Grand Wash. 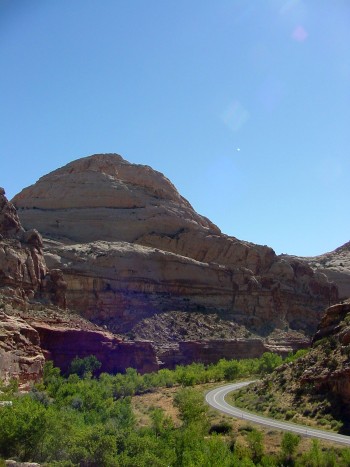 Notice the holes at the base of a layer of yellowish-gray rock. This is the abandoned Oyler Uranium Mine, opened in 1904 when uranium was used in some "over the counter" patent medicines. This rock crumbles easily so keep back from the entrance.

At stop number one you saw the rock layers of the Moenkopi Formation that were once silt and clay. It wasn't hard to visualize their flood plain origin.

Look closely at the massive, sheer cliffs. Focus on the base of the wall below. Do you see sweeping lines that intercept one another at varying angles in the rock? This is crossbedding. Where crossbedding occurs on a large scale like this, it means that here once drifted the windswept dunes of an ancient desert.

Sediment becomes rock when it is buried and compacted by huge overlying loads of other sediment. Individual sand or clay particles are cemented together by minerals in seeping ground water.

As ages pass, the cement of the ancient rock is dissolved by weak acids in rainwater. Small cracks in the rock are widened by frost and plant roots. The rock washes away in chunks and particles. This is what geologists call weathering, part of the larger process of erosion.

Shallow holes you see here in the cliff are being excavated as erosion removes more weakly cemented sand grains.

A few small, weather sculpted arches can be seen in Shinob Canyon, which cuts in the south wall of Grand Wash to your right. Cassidy Arch is nestled high in the cliffs to your left.

There are more plants in Grand Wash than on the red hills at the start of the Scenic Drive. Although relatively naked stone - slickrock - dominates the landscape here, plants also are plainly visible.

Although the channel beyond the bank to your right carries no water most of the time, it does occassionally. Many plants thrive nearby.

Some, like Apache-plume, are rarely found away from washes such as this. Other species here like rabbitbrush also tolerate drier environments.

There can be too much water. In the continuing process of erosion, flash floods roar down the canyon carrying debris that crushes and smothers vegetation.

In effect, plant life survival means a compromise between a demand for water and a need for protection from floods.

The road now winds through an older, deeper part of the familiar red shales of the Moenkopi Formation. Here, however, fairly uniform layers of sandstone can be seen among the red shale beds, often forming small ledges.

As you saw in Grand Wash, the towering walls of Wingate Sandstone were deposited originally as dunes in a vast desert. If you take a close look at the thinner beds of sandstone here in the Moenkopi, you will see signs that this sand was deposited by water.

The sweeping lines of crossbedding that form in dune sands are missing here. The surfaces of many slabs are covered with ripple marks and mud cracks that formed when wet mud dried under a hot sun. Sometimes people find the tracks of an exintct, primitve reptile called Chirotherium in the rock slabs.

This sandstone was laid down not be desert winds, but by the gently moving, shallow waters of coastal tidal flats. 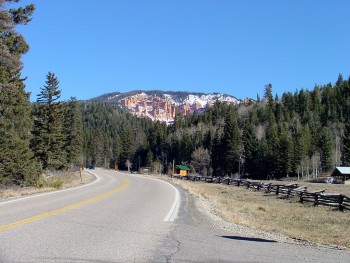 Think again of the large expanse of bare rock exposed to the sun, wind, and rain. When rain does come to Capitol Reef, it often descends in torrents. Thin patches of soil can do little to absorb and hold it.

Poets sometimes speak of water as "carving the face of the land". However, the main role of rushing water in shaping Capitol Reef is not to gouge, but carry away the materials already loosened by weathering.

Gravity draws lossened debris to washes where it can be picked up by moving water. In desert thunderstorms, this slow process of gravitational "creep" is accelerated by deluges that wash down every slope and flush loose debris into channels that soon fill with a tumbling, red torrent.

Imagine all the torrents of a plateau coverging upon a single gorge and you will realize how floods develop in a "flash". If you can picture millions of storms pounding this land thorugh the ages, you will have begund to grasp fully the one process that has shaped Capitol Reef.

Here you see again a formation you've come to know well on your drive - the reddish brown Moenkopi. This is a good place to point out a rock layer that is not visible - rather doesn't exist - near the park visitor center.

Shinarump is found only here and there at Capitol Reef, which hints at the way it was deposited. Apparently, the Shinarump sediments were laid down in the channels of rivers that meandered across a coastal plain 200 million years ago. Shinarump is composed of sands and gravels like those in many shallow river beds today.

This sandstone is often rich in uranium. The old mine tunnels you saw at stop number three were dug into Shinarump.

Notice how the Shinarump ledge erodes into debris that litters the clay slopes beneath. This rock rubble forms a protective cover that slows down the rate of erosion, traps precious moisture and changes the texture of the soil. Plants gain a foothold more easily.

The final two stops lie along the Capitol Gorge spur road, longer and more winding than Grand Wash. Although a through road from 1884 to 1962, the drive now ends about two miles from here.

The awesome narrows you will now enter is worn through Wingate Sandstone, the same formation that forms the sheer cliffs along the west face of Captiol Reef and the towering walls of Grand Wash. For some, Capitol Gorge is erosion's most dramatic handiwork at Capitol Reef National Park.

The right fork of the road here leads to Pleasant Creek, one of the few perennial streams in the park.

As wagonmasters did a century ago, carefully consider the weather before you proceed into the gorge.

Soaring to your front left is an eroded layer of sandstone that, like the Wingate, was once desert sand. This sandstone is the Navajo Formation, over 1,400 feet thick in places. Its white, rounded domes inspired a name for Capitol Reef.

Many visitors notice that the Wingate and Navajo - both formed from ancient deserts - seem to erode differently. The Wingate tends to make sheer cliffs; the Navajo rounded domes. Why?

Part of the answer lies in the rock layers upon which these "petrified deserts" rest.

The Wingate lies on the soft beds of the Chinle Formation. Because this softer rock erodes more rapidly and undercuts the Wingate, the massive sandstone often breaks away to form sheer cliffs.

By contast, the Navajo rests on the reddish rock layer that forms the base of the canyon walls on both side of you. This water-deposited sandstone - the Kayenta Formation - provides a firm foundation. The Navajo is undercut less often than the Wingate and erodes away in smoother contours.

Incidently, the Kayenta lies just above the Wingate and just below the Navajo Formation. It is about 350 feet thick and 190 million years old. 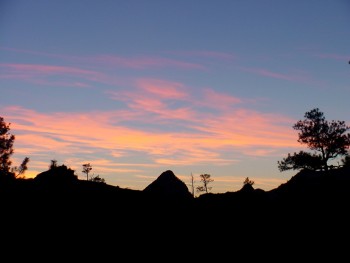 Perhaps it is fitting to end your tour here, deep within Capitol Gorge. All around in soaring summation rest elements of the Capitol Reef geologic story.

Dune lines in Navajo Sandstone walls whisper of the ancient landscapes and sediments that became rock. Rounded domes and deep canyons proclaim eloquently the power of erosion. And the rapid changing of rock layers along the fairly level Capitol Gorge spur road testifies to the tilting and bending of the Waterpocket Fold.

A short stroll down the canyon takes you by the vandalized remains of some ancient rock art or petroglyphs. American Indian farmers of the Fremont Culture cultivated their crops along the streams of Capitol Reef until about 1300 A.D. Their most puzzling legacy may be rock art.

In 1884 it took Mormon pioneers eight days to clear the first road through the Gorge, and settlers had to remove heavy debris after every flash flood. When Utah Hwy 24 was opened in 1962, the road was closed. Early travelers recorded their passage on the canyon walls at the Pioneer Register.

You will end your walk at The Tanks, where erosion has carved pockets in the rock that often hold rainwater.

Perhaps your journey down the Scenic Drive - and through the rock formation of ages - has helped you know better a scenic grandure that often leaves newcomers awed.