Boulder City is 20 miles to the southeast of Las Vegas. The city was first established by the Bureau of Reclamation to provide housing for those who were building the Hoover Dam. While it is today home to a small population, it is geographically one of Nevada's largest cities.

The city offers many different recreational activities. The city has two golf courses, a city pool, and a BMX bicycle track. Other facilities include racquetball courts, lighted tennis courts, and various athletic fields. It is also home to the Alan Bible Botanical Gardens that showcases desert cacti and plants. Bible was a United States Senator from Nevada.

Of note, since gambling is illegal in Boulder City, it is the only part of Nevada where this is the case. It was also not until 1969 when selling alcohol was permitted.

Henderson is located five miles southeast of Las Vegas. It is one of the fastest growing cities with a population over 150,000 in the United States.

Like other towns and cities in Southern Nevada, Henderson started out as a community where workers of government projects or companies lived. In Henderson's case, the Basic Magnesium Plant established the area where the area is now during the World War II period. After the war, the need for magnesium dropped, and the plant closed. In 1947 the State of Nevada purchased the land and incorporated Henderson on April 16, 1953. Today Henderson is one of Nevada's most populous cities.

Laughlin is 94 miles south of Las Vegas and is on the Colorado River. Bullhead City, Arizona is just across the state border from the city.

It is one of Nevada's top casino and hotel cities. A few resorts on The Strip - like the Flamingo - have sister resorts here in Laughlin. These casino resorts offer excellent dining and entertainment options from family friendly to adult shows. 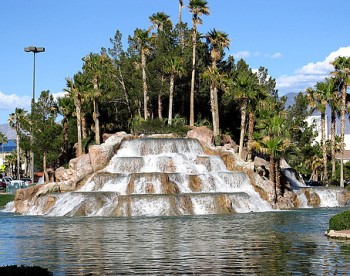 Mesquite is 80 miles east of Las Vegas on Interstate 15. It is on the Nevada-Arizona border.

The city boasts of resort thrills with a small city feel. It is home to four casinos, six golf courses, and two full-service spas in the beautiful Virgin River Valley. It is quickly becoming a well known resort destination away from the hustle and bustle of larger destinations like Las Vegas. People come here to relax, not overstimulated.

Paradise is an unincorporated town of Clark County, Nevada that is governed by the county commission. Its area includes McCarran International Airport (LAS) and most of The Strip. Thus, for accuracy, what happens in Paraside stays in Paradise. It was established to prevent the City of Las Vegas from completely annexing The Strip.