Springdale, Utah lies at the southwest entrance of Zion National Park and within an hour's drive of the borders of both Nevada and Arizona. The town was first settled by Mormon pioneers, in the autumn of 1862, who were establishing a "Cotton Mission" under the direction of the Mormon Prophet Brigham Young. According to local legend, Springdale got its name from the wife of one of the earliest settlers, Albert Petty. When Mrs. Petty saw that the spot for their new home was close to several springs, she named the site "Springdale."

As roads and automobiles improved, visitors began arriving around 1917 to stay at the Wylie Way Camp, one of the first tourist businesses in the Zion Canyon area. In 1909 the Mukuntuweap National Monument was established and later renamed Zion National Park in 1918. As the popularity of Zion increased, Springdale became a tourism oriented community. The completion of the Zion-Mt. Carmel Highway and Tunnel in 1930 further facilitated travel to the area, and now roughly three million visitors come annually though Springdale, Utah to visit Zion National Park. 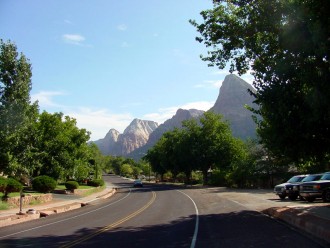 Like other towns in southwestern Utah, Springdale has both an Indian and pioneer heritage. Archeological evidence suggests that the area was continually populated as early as 500 A.D. and up until about 1200 A.D. when the Anasazi Indians left the area. However, the first European expedition through the area, led by Franciscan priest Silvestre Velez de Escalante, in 1776 encountered Paiute Indians. These Indians relied upon the nearby Virgin River to support their existence.

The hearty group of early European settlers endured a rustic existence until the turn of the twentieth century when improved roads and the introduction of cars brought tourists to the area. However, the early settlers placed importance on education and they set up a school shortly after they arrived. The school taught the basic subjects of reading, spelling, writing, and arithmetic. Since the children were mainly focused on helping their families with farm duties, school attendance was typically infrequent as children in the same family took turns going to school. Originally, life was also rough as many of the houses were made of wood and covered in mud, many tools were handmade, and surrounding Indians continually threatened the settlers.

Until the late 1800s, Springdale was a satellite community of Rockville, a larger town nearby. Residents traveled to Rockville for shopping, services, and church. It was not until about 1885 when Springdale got its own school and church, and the first post office was built here in 1897.