Apple Valley started out as a housing development between Hurricane and Hildale on SR-59. However, they grew concerned in 2003 over possible annexation by one of the neighboring towns or the possible construction of a truss factory. The town of Apple Valley officially incorporated in October 2004. It is very picturesque with the beautiful desert scenery that makes nearby Zion National Park attractive to people from all over the world.

Children in Apple Valley attend Three Falls Elementary, Hurricane Middle School, and Hurricane High School. In 2004 it had a population of 650.

Bloomington is a community that is located in the southern part of St. George city and is on the west side of Interstate 15. Bloomington was originally established as a development around the Bloomington Golf Course. The Virgin River follows a winding course through the community and is crossed by Man O' War Bridge. Part of the community

Central is a small community about 26 miles north of St. George on SR-18. Many people live here who enjoy the opportunity to enjoy a rural open space area while enjoying the amenities of St. George nearby.

Located 40 miles north of St. George on SR-18, Enterprise is an agricultural town. It produces products like potatoes, alfalfa, and hay. In fact, the hay from Enterprise is shipped all around the world.

Gunlock is located about 21 miles northwest of St. George. It was established on the Old Spanish Trail so that the residents could trade with people traveling on the trail. The name "Gunlock" is the nickname of the community's founder, William Hamblin, who was a gun expert. Each year Gunlock hosts its own rodeo.

Hildale is an interesting town in that it is home to a clan of polygamists along with its sister city, Colorado City, Arizona. It is south of Hurricane and Apple Valley on SR-59 just 20 minutes away from Pipe Springs National Monument. 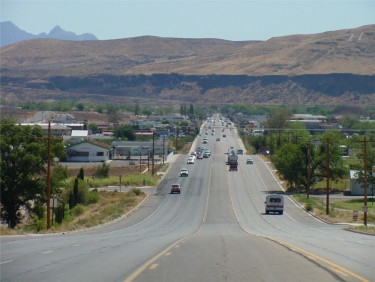 Hurricane is a rapidly growing town located about 19 miles northeast of St. George. It is on Highway 9 which connects with Interstate 15. It was originally settled at the turn of the century when a canal was eventually built to support a town here in Hurricane. Now the area has many orchards and turf grass farms. It also welcomes millions of people a year who travel through the town to visit Zion Canyon in Zion National Park.

At the foot of dramatic 1,500 foot red cliffs, Ivins is truly a beautiful place to live. It is also home Tuacahn Center for the Arts which brings Broadway to the desert and Red Mountain

Spa which offers luxurious pampering and rejuvenating recreational activities. The town was not settled until the early 1920s after a canal was finally built in the area during World War I. Ivins is a few miles northeast of St. George and is near Snow Canyon State Park.

La Verkin is just north of Hurricane on SR-9 on the Virgin River. The La Verkin Fruit and Nursery Company which incorporated in the late 1880s, and helped bring people and money to the town. Today it is a growing town since nearby Hurricane is rapidly growing.

Located 17 miles northeast of St. George on Interstate 15 is Leeds. It was established in 1867, but really began to grow a few years later when silver was discovered in nearby Silver Reef. Today the town enjoys a peaceful existence near the Quail Creek State Park and other points of interest like Silver Reef ghost town.

About 40 miles northeast of St. George is the small bedroom community of New Harmony. This area is known for its orchards that produce delicious fruit. Of note, it was the first settlement and county seat of Washington County when it was established in 1852.

Pine Valley, about 35 miles north of St. George, is a picturesque community with uncharacteristic green pine trees and meadows. This is a favorite place for Southern Utahns to visit since it is so green and unlike the desert landscape of the rest of the region.

Rockville is just west of Springdale and the mouth to Zion Canyon in Zion National Park on SR-9. It was originally settled in the 1860s by early Mormon settlers who were trying to set up cotton growing areas here. Now, it is a bedroom community that welcomes millions of annual visitors who come to see Zion National Park.

Santa Clara began when Jacob Hamblin and other Mormon missionaries built a cabin in the 1850s on the Santa Clara River to work with the Paiute Indians and travelers going to California during. Now, Santa Clara is a prosperous community whose borders with St. George are now almost indistinguishable. It is also near Snow Canyon State Park.

Silver Reef is about 18 miles northeast of St. George and has an interesting history. It was a silver mining town after silver was discovered here in the 1870. The silver mining industry brought many businesses here, and historic building still stand. People from all over the area come here to visit this ghost town.

Toquerville is six miles northwest of Hurricane, and is a pleasant little town.

It is in Washington County that borders both Arizona and Nevada. This small town of just under 1,000 residents during the 2000 census, is a great place to live. It provides a small town feel, but is just 24 miles northeast of St. George and 35 miles southeast of Cedar City, which are both larger towns. Interstate 15 provides easy access to the town.

Millions of people annually visit the Tocquerville area as they visit nearby Zion National Park. Zion Canyon, the most popular part of the park, is about 24 miles east of the town along State Highways 17 and 9. Also, the exit on Interstate 15 to Kolob Canyon is nearby to the north of the town.

A spot that locals enjoy is the Tocquerville Falls. Here water cascades over a series of rock drop-offs, and people typically hike to them and eat a picnic.

Veyo is a small community about 16 miles north of St. George on SR-18. The community was established in 1914 after a canal was built to bring water to the town. Just north of Veyo is Brookside. The community has several businesses despite its small size and out-of-the-way location.

Virgin is a few miles east of Hurricane on SR-9. It welcomes millions of people each who travel along SR-9 on their way to Zion Canyon in Zion National Park. Access to Kolob Canyon in the national park from the south is only through Virgin. The town was settled in the 1850s as a farming community. Oil was even drilled here for a few decades.

Just northeast of St. George is Washington City. It was originally founded as part of a cotton growing mission in Southern Utah by early Mormon pioneers in the 1850s just before the Civil War. Since then Washington City has grown like St. George and other Washington County cities. Currently, the city is enjoying an influx of retirees who find the mild winters here attractive.

These three housing developments north of St. George along SR-18 flourished over the last 15 years. People who live in these developments want to live both near the natural scenery of Southern Utah while enjoying living close to the conveniences of St. George. Many of the residents own animals like horses and chickens. These developments are all close to the northeast entrance of Snow Canyon State Park, and a new community is developing surrouding The Ledges Golf Course just south of Winchester Hills.

Students from these communities attend Diamond Valley Elementary School, Desert Hills Intermediate, Dixie Middle School, and Dixie High School. Each development has a park for residents to enjoy with their families.