Arches National Park lies atop an underground salt bed called the Paradox Formation, which is responsible for the arches, spires, balanced rocks, fins and eroded monoliths common throughout the park. Thousands of feet thick in places, the Paradox layer was deposited across the Colorado Plateau some 300 million years ago when a sea flowed into the region and eventually evaporated. Over millions of years, the salt bed was covered with the residue of floods and winds as the oceans returned and evaporated again and again. Much of this debris was cemented into rock. At one time this overlying layer of rock may have been more than a mile thick.

Salt under pressure is unstable, and the salt bed below Arches began to flow under the weight of the overlying sandstones. This movement caused the surface rock to buckle and shift, thrusting some sections upward into domes, dropping others into surrounding cavities, and causing vertical cracks which would later contribute to the development of arches. 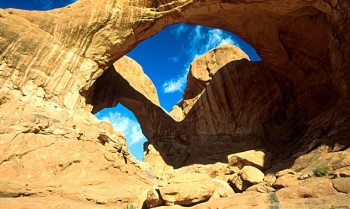 The Formation of Arches

As the subsurface movement of salt shaped the surface, erosion stripped away the younger rock layers. Water seeped into cracks and joints, washing away loose debris and eroding the "cement" that held the sandstone together, leaving a series of free-standing fins. During colder periods, ice formed, its expansion putting pressure on the rock, breaking off bits and pieces, and sometimes creating openings. Many damaged fins collapsed. Others, with the right degree of hardness and balance, have survived as the world famous formations of Arches National Park.

Faults deep in the Earth also contributed to the instability on the surface. The result of one such 2,500-foot displacement is called the Moab Fault and is visible from the Arches Visitor Center. Salt Valley was also formed by such a displacement. Except for isolated remnants, the major rock formations visible in the park today are the salmon-colored Entrada Sandstone, in which most of the arches form, and the tan-colored Navajo Sandstone.