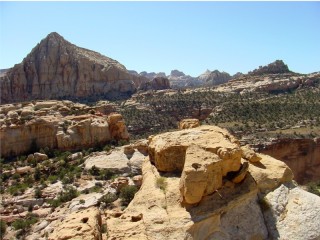 More recent uplift of the entire Colorado Plateau and the resulting erosion has exposed this fold at the surface only within the last 15 to 20 million years. The name Waterpocket Fold reflects this ongoing erosion of the rock layers. "Waterpockets" are basins that form in many of the sandstone layers as they are eroded by water. These basins are common throughout the fold, thus giving it the name "Waterpocket Fold". Erosion of the tilted rock layers continues today forming colorful cliffs, massive domes, soaring spires, stark monoliths, twisting canyons, and graceful arches.

The most scenic portion of the Waterpocket Fold, found near the Fremont River, is known as Capitol Reef: "capitol" for the white domes of Navajo Sandstone that resemble capitol building rotundas, and "reef" for the rocky cliffs which are a barrier to travel, like a coral reef.

Nearly 10,000 feet of sedimentary strata are found in the Capitol Reef area. These rocks range in age 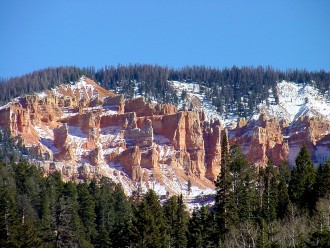 The tilt of the Waterpocket Fold dies out at Thousand Lake Mountain near the northwestern boundary of the park. Rock layers in Cathedral Valley have a gentle inclination of 3 - 5 degrees to the east and appear nearly horizontal.

Deep erosion has carved Cathedral Valley's free-standing monoliths, or temples, out of the soft reddish-orange Entrada Sandstone, which was originally deposited as sandy mud on a tidal flat. Some of the cathedrals are capped by thin, hard beds of a greenish gray marine sandstone, the Curtis Formation.

The scenery of the Entrada Sandstone temples of Cathedral Valley is complemented by evidence of other geologic processes at work. Flowage and dissolution of gypsum, a soluable mineral from the underlying Carmel Formation, created Glass Mountain and the Gypsum Sinkhole. Glass Mountain is an exposed plug of gypsum. The Gypsum Sinkhole formed when a gypsum plug dissolved. Dikes and sills, which are thin bodies of igneous rock and small volcanic plugs, are found in Upper Cathedral Valley. These features formed during volcanic activity 3 to 6 million years ago.

Most of the erosion that carved today's landscape occured after the uplift of the Colorado Plateau sometime within the last 20 million years. Most of the major canyon cutting probably occured between 1 and 6 million years ago. 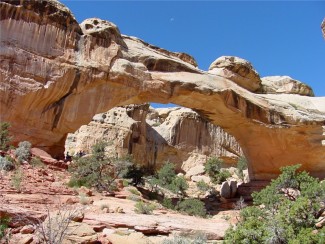 Even in this desert climate, water is the erosional agent most responsible for the carving of the landscape. The pull of gravity, in the form of rock falls or rock creep, plays a major role in the shaping of the cliff lines. Wind is a minor agent of erosion here.

The landforms are a result of different responses of the various rock layers to the forces of erosion. Hard sandstone layers, like the red Wingate and the white Navajo Sandstones, form cliffs. Softer, shale layers, like the Chinle Formation, form slopes and low hills. The barren slopes found in many areas are due in part to the presence of bentonitic clays in the shale which make an inhospitible environment for plants.

The black boulders, found scattered throughout the Fremont River valley and along other drainages, are recent geologic arrivals to Capitol Reef. These volcanic rocks came from the 20 to 30 million year old lava flows which cap Boulder and Thousand Lake Mountains. The boulders made their way to Capitol Reef during the Ice Ages when the High Plateaus supported small mountain glaciers. Landslides, debris flows, and possibly heavy stream outwash from these glaciers carried the boulders to lower elevations in the park.

Capitol Reef National Park was established because of the scenic rock domes and narrow canyons found along the trace of the Waterpocket Fold. Indeed, the park boundaries were drawn to encompass most of the Fold. Capitol Reef is a place to enjoy the scenic majesty formed by geologic processes, and also to appreciate the interrelationships between the Earth and all life found in the varied environments within the park - - from the forested slopes of Thousand Lake Mountain, to the green oasis of Fruita, to the barren Bentonite Hills