American Indians at Grand Canyon - Past and Present 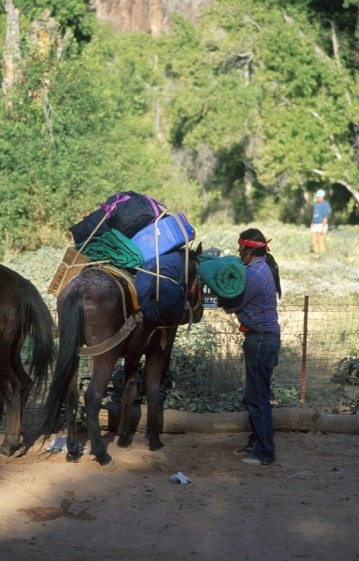 The ancestral Puebloan people of the southwestern United States made their home in the four corners region, where Utah, Colorado, New Mexico and Arizona share a common point. Their record in this region is rich and spans the time period from 200 B.C. to A.D. 1300.

The ancestral Puebloan people are believed to be the ancestors of the Hopi people, who inhabit a region east of Grand Canyon. The Hopi name for these ancestors is Hisatsinom (hee-SOT-sin-ahm). The Hopi people believe they emerged from the canyon and that their spirits rest here.

The Havasupai people inhabit the inner canyon in a region west of Grand Canyon Village. In this remote and beautiful corner of the canyon sits the village of Supai and the descendants of a people who have lived within the canyon for several hundred years. The village remains accessible only by foot, pack animal or from the river but is still heavily visited each year by tourists.

The Navajo people make up one of the largest tribes in North America. The Navajo live throughout the region and on the Navajo Reservation, which borders the park to the east. Relative newcomers to this region, they are the descendants of Athabascan peoples who migrated into the southwest from the north in the 15th Century.

The Hualapai Reservation borders the canyon to the south. The Hualapai are descendants of the Cerbat people and have been in the area since A.D. 1300.

The Southern Paiute Indians occupy land north of the Colorado River in what is known as the Arizona Strip. They have traditionally used the canyon for hundreds of years.

The Zuni Indians view the canyon as their place of origin, though today they live in New Mexico.