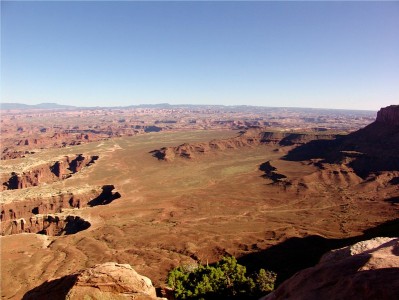 Geologic processes have played a very important part in shaping the desert ecosystem of southeast Utah. Throughout the area, canyons and faults have exposed millions of years of geologic history.

For over 300 million years, water and wind deposited materials from a variety of environments onto what is now the Colorado Plateau. The depositional regimes included shallow marine seas, tidal flats, freshwater stream systems, alluvial fans, swamps and Sahara-like deserts. Over time, the remains of these various environments were cemented into the layers of sedimentary rock visible today.

Roughly 15 million years ago, the Colorado Plateau began slowly uplifting. As the Green and Colorado rivers cut through the layered sandstones, they became trapped and carved the deep, meandering canyons we see today. Water from nearby mountain ranges like the Abajos, La Sals, and Henrys drains into these rivers, eroding the landscape further into a network of tributary canyons.

Most of the rock stata on the Colorado Plateau are flat. However, significant faulting occurred in some areas when a deep layer of salt called the Paradox Formation liquified under the weight of overlying sandstones. The shifting salt caused the surface rock to bow and fracture or, in some cases, to collapse downward. The result of this movement is dramatic in both Arches and the Needles District of Canyonlands. Over time, floods and the action of water freezing and thawing enlarged these fractures and eroded the sandstone into a variety of spectacular shapes.