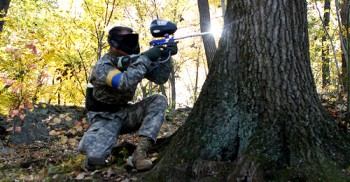 Paintball - the mock war craze of the 1990s - is a fun activity for friends and family. It is a great and safe way to have shoot-them-up fun. However, don't play paintball in Bryce Canyon National Park - even though all the beautiful color here appear that it was the site to one grand paintball war.

Many guests to the Bryce Canyon are now experiencing a unique and entertaining activity called "PAINTBALL!" Paintball is a war game played with guns that have been calibrated to safely shoot a water soluble paint pellet at an opposing team. Paintball was initially used by the military in their war games has become a popular worldwide activity for adventure seekers.