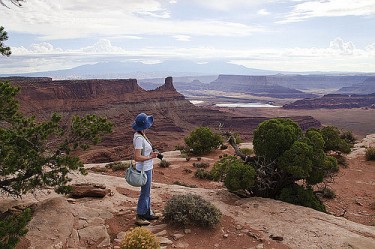 There is a very limited water supply in the canyon, plants in the area have had to adapt by decreasing the size of their leaves so as to reduce the amount of water lost through evaporation. Some of the plants are dormant for part of the year as a result of the precipitation patterns. Animals have also learned to adapt to the climate; due to the extreme heat during the day many of the animals around Dead Horse Point are nocturnal. They prefer to come out at night when the temperatures are lower and their need for water is lessened. The soil at Dead Horse Point has a cryptobiotic crust, which means that it contains many living organisms. It is important that you remain on the trails within the park so as not to disturb the area’s delicate ecosystem.

Dawn or evening sun presents this state park in its most magnificent glory. Be sure to explore all the little trails that seem to lead nowhere, because each one shows an entirely different personality of the park.

The Legend of Dead Horse Point:

Dead Horse Point is a rock peninsula atop sheer sandstone cliffs and is connected to the mesa only by a narrow strip of land. Around the turn of the century cowboys used the peninsula as a natural corral for the mustangs that ran wild through the area. The cowboys would herd the wild horses onto the peninsula and then fence off the narrow, 30 yard neck of land that would have been their only escape. Once contained within the peninsula, the horses were roped and broken and the better ones were led off of the peninsula to be used or sold while the rest were left to continue roaming across the land. There is a legend telling of a time when a large group of unwanted mustangs was left corralled on the point, unable to find their way out they died of thirst and left behind their bleached bones as a reminder. (There is some discrepancy as to whether or not the gate was left open or closed.) It is from this legend that Dead Horse Point received its name.

Follow US 191 nine miles northwest of Moab and then turn west onto 313, after following the road for approximately 23 miles, you will find Dead Horse Point near end of the highway.