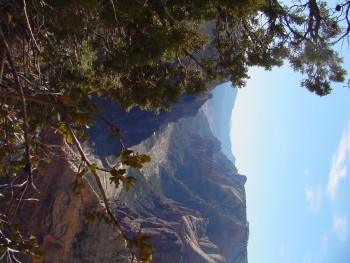 Zion National Park in Utah is one of the state's most popular attractions as it annually brings several million tourists from all over the world to the area. Some of Utah's most recognizable landmarks are located here; these include: Angels Landing, the Great White Throne, Narrows, Three Patriarchs, and hoodoos in Kolob Canyon.

Zion is in the southwest corner of Utah near its borders with both Arizona and Nevada. The vast majority of the national park is in Washington County with a northern section in Iron County while a western part is in Kane County. The largest close city is St. George that is only about a 45 minute drive away from Zion Canyon. Other nearby towns are: Cedar City, Hurricane, Kanab, and Springdale. Salt Lake City is about 300 miles to the north, and Las Vegas is approximately 150 miles to the west.

Interstate 15, Utah's north-south corridor, provides the easy access to the park from both Salt Lake City and Las Vegas. Kolob Canyon is just off of the freeway and has its own exit while the Hurricane exit for State Highway 9 is a 30 to 40 minute drive to Zion Canyon.

The national park is part of the Grand Circle -- a group of landmarks in the southwest like the Grand Canyon and Bryce Canyon.

Since southern Utah enjoys hot summers and warm winters, tourists enjoy Zion National Park throughout the year. In fact, many people enjoy visiting the park during the autumn, winter, and spring since it is not as crowded, and some people even enjoy camping during these seasons since the area's low temperatures are quite mild.